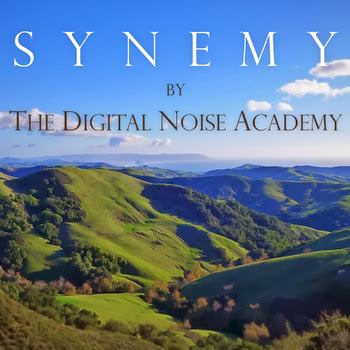 
The Digital Noise Academy, also known as DNA, is a collaborative project between six musicians and producers including Ken Andrews and Jordon Zadorozny formerly of 90’s alternative bands Failure and Blinker The Star, along with Sharky Laguana of Creeper Lagoon, singer-songwriter Charlotte Martin, Fernando Sanchez, and former Beck bassist and M83 producer Justin Meldal-Johnsen. Together, they combine electronica and power-pop leaning alt-rock along with their collective experiences into a nostalgia-laced yet unique and modern sound that is experimental while also holding true to each musician’s distinct musical "DNA".
“Stop Running” opens the album with churning, early Smashing Pumpkins-like swirls of guitars and a propulsive rhythm. Charlotte Martin, who has lent her voice to electronica tracks by The Crystal Method and Tiesto is put to great use on the slinky, synth-driven standout single, “Melting Inside”, with its danceable beat and bubbly vocal melodies. The title track, “Synemy” opens with soft, cascading guitars before launching into a soaring chorus with cosmic synths and sci-fi imagery. Two other standout tracks on the ten-song album are “Thursday Night Party”, reminiscent of cult favorites Failure with its chugging guitar rhythm; and Zadorozy’s sparkling vocals and the squelching electronics of “Circulation”, that recalls Andrew’s electronica-inspired solo project, ON.
After perfectly combining all of their collective experiences and influences into one cohesive and captivating sound, the six musicians of The Digital Noise Academy have hit the right notes once again on their new album, Synemy. (Atlas and the Anchor)