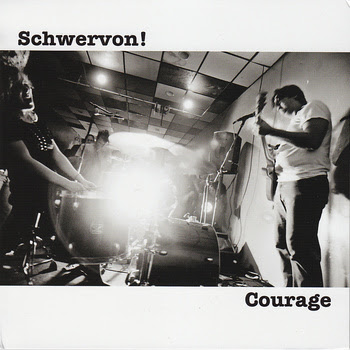 
Last summer, Schwervon! took a break from the hustle and bustle of their home headquarters in New York City and headed south to the land of Elvis and Stax Records (Memphis, TN). Their mission was to record with legendary indie rock engineer Doug Easley (Pavement, Sonic Youth, Cat Power). Matt says his original inspiration for the duo taking the trip down south was listening to old Grifters albums, and specifically reading a very conspicuous advertisement for Easley-McCain Studios on the inside fold of the Grifters' first Subpop Release "Ain't My Lookout". Everything came full circle when Dave Shouse (Grifters, Those Bastard Souls, The New Mary Jane) agreed to appear as a guest vocalist for the song "Daydream Ration". Also appearing as a guest vocalist on the track "Truth Teller" is Frances McKee, of legendary Glaswegian band The Vaselines. Schwervon! befriended McKee after opening for The Vaselines on their European tour in 2011. Between the recording sessions and the official release of the record, Nan and Matt moved from NYC to Kansas City. They could no longer afford to NOT be doing music full-time and decided to leave Manhattan to make this possible. They moved to Matt's tree-lined hometown of Shawnee, Kansas where they now reside between tours with their cat Gummo and his Dad, Harry. They will be touring the U.S. and Europe through the fall of 2012 & spring 2013 in support of Courage. (bandcamp)