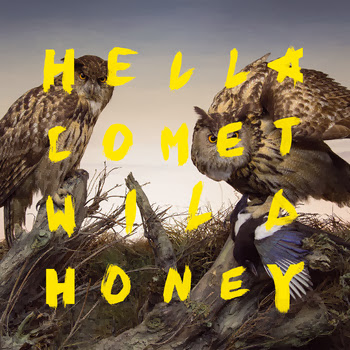 With their 2010 debut, “Celebrate Your Loss”, Hella Comet already impressively proved that indie rock does not always have to be what you would usually expect to hear. Listening to the recently released album “Wild Honey” (Noise Appeal Records), the Styrian band presents their own version of this style with a lot more musical facets than you are normally used to. From the overall sound to the songwriting, from the melodies to the arrangements, everything is a tad more sophisticated, thoughtful and lively, and shows that the four musicians definitely know how to serve up their ideas with an extra boost of energy and an exceptionally high degree of variety.

Although one can not quite deny the band’s affinity to the indie rock sound of the 90′s in the style of bands like Smashing Pumpkins or Sonic Youth, Hella Comet have a lot more to offer in terms of innovative songwriting, without the need to reproduce already known quotes of rock history. The four band members know how to charge a song with a certain mood and their own unique touch, creating an atmospheric tension over breaks, clever progressions and longer instrumental interjections. In this respect, Franz “Frente” Gurt, Jürgen “Jure” Hochsam, Markus “Maex” Sworcik and Lea Sonnek also sometimes convert to more post-rock climes, giving their tracks all the time needed to reach their fullest potential.

This certain “extra” that enhances the really bold, but also refreshingly edgy produced songs of the Styrian band is also evident in the fact that they often leave well-known indie-rock structures to let the individual songs develop a life of its own. At the point where other formations are content with bringing their songs to an end in simple verse-chorus forms after two to three minutes, Frente, Jure, Maex and Lea seem to just get started with gaining momentum. The songs begin rather quietly and slowly, but soon pile up with huge guitar walls and then switch back to a rather reduced, but steadily increasing middle part, which is then finished off with several minutes of a beautiful noisy finale. This convoluted style is repeated in modified form in almost every song, which ultimately turns the whole album into a very varied and exceptional sound journey.

With “Wild Honey” Hella Comet definitely demonstrate that new creative visions and ideas in the field of indie rock are still possible, as long as you follow your own path.