PORCHES. Slow Dance in the Cosmos 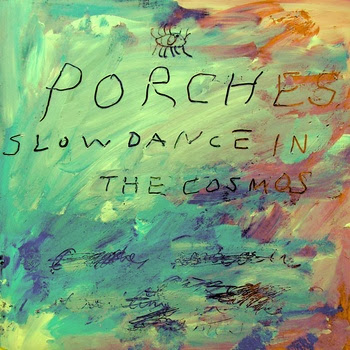 What some music is really, really good at is embracing the shittier moments of life and laughing in the face of them. It doesn’t work for everyone, of course, but there are certain artists who seem primed to tread that line; running as fast as they can down the thinnest of balance beams, trouble on one side, contentment on the other, constantly falling off on either side, but always getting back up and never, ever slowing down.

Over the last six years Aaron Maine has released eight records, under various different guises. His latest project is Porches and next week the band releases their debut full-length, the wonderfully spirited Slow Dance In The Cosmos. Unflinchingly honest and beautifully wry, it’s the kind of record that seems to have been dropped in from another era, finding itself wide-eyed and slightly lost in an age it never really feels at ease in. “I thought I saw your face in the fog, but it was just the fog” Maine sings on album centre-piece Fog Dog and that’s a somewhat fitting summation for a record that often feels slightly awry and confused but, at it’s core, is always searching and pining for something more.

A wonderfully downbeat collection of songs, Slow Dance In The Cosmos is a marvelous achievement and an album to truly lose yourself in – just don’t expect the journey back from it to be a straightforward one.