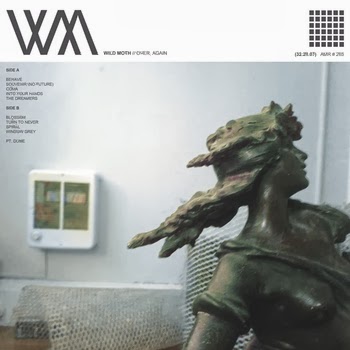 Both Wild Moth's Mourning Glow and self-titled had me up in arms. They were fluently entangled in a distanced vibe that really made me understand what shoegaze meant, and more importantly, felt like. Over, Again has all these elements and more. It's detached, introspective and non-confrontational which adds so much to the surrealism that Wild Moth loves to dig at.

"Souvenir" drains you with the typical Wild Moth sound, that leaves you wondering how much did San Francisco really influence their music. There's no reinventing the wheel here, as each crack of the drum feels like a resurgence of emotion. Epic basslines and the pinnacle of what seems to be thestandard for shoegaze leaves you wondering how high the bar's been set - and all this from just one track. Undeniable and unbelievable. 'I feel the walls closing in / Blinded by a thick veil / Starting all over again / Idealized conviction / I feel the walls closing in / Designed to repeat itself spews forth the precious character of the band and they've distinguished themselves even more because they simply love to test their boundaries and push the envelope, by the record.

"The Dreamers," as colossal as it is with such a brilliant musical narrative, is reminiscent of a calmer Bloc Party, and Wild Moth love to contextualize their high-concept theories and influences, in such a cool, calm and collected manner. "Into Your Hands" follows a similar vein of technical superiority, reinforcing why Wild Moth need to be garnering much more acclaim at the moment. Their music is effortlessly catchy.

Playing off the predispositions of the band's sound, "Pt. Dume" closes to perfection. The smokescreen of the world and the miscellaneous tidbits that lead, connect or weave indie-shoegaze are played out in every lick and riff with this band, who at times come off a tad precocious and a tad pretentious on their existentialist vibe, but all in all, you can't help but love their music. It rubs you that well. Don't be afraid to jump in. Wild Moth have a record that'll take good care of you. Lovers of their old stuff and those who are venturing into new territory won't be disappointed. (punknews.org)