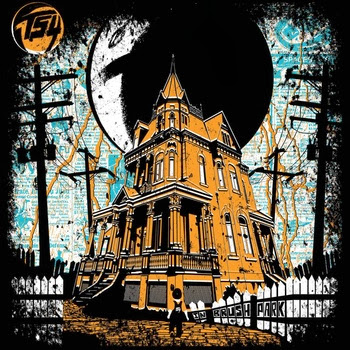 Noisy psych guitar pop is in abundance in New Zealand at the moment and the cream of the crop like Popstrangers, Surf City and these fine gentlemen, T54, are improving with each new release. Flying Nun is a natural home for the band as they deal equally and unassumingly in melody and adventurous sonics, soaking up the influence of their predecessors like 3Ds, JPS Experience and Loves Ugly Children while still carving out their own sound.

In Brush Park is the band’s debut full-length release and a very assured and mature-sounding one at that. There is little impression of them still still trying to find their feet stylistically, they’ve already arrived at it with woozy, chiming guitars alternating between beauty (‘O Nina’) and coruscating attack like the dissonant ‘Return Of The Worm’ and the punky ‘SW Chops’. Joe Sampson’s vocals add texture more than meaning in the context of the album. It drifts in and out of the frame adding angst, yelps and counter-melodies to the guitars and economical drumming.

Brutally efficient, In Brush Park only just hits the 30 minute mark yet it feels like a full and often overflowing album with more than enough swerves and variation to show the full range of T54’s writing and playing abilities. Its strength also lies in its toughness, its lack of soft indie shoe-gazing best exemplified by ‘Biscuit City Sisters’’ epic 7 minutes of driving krautrock that closes the album, the crowning glory of a very, impressive guitar rock record.