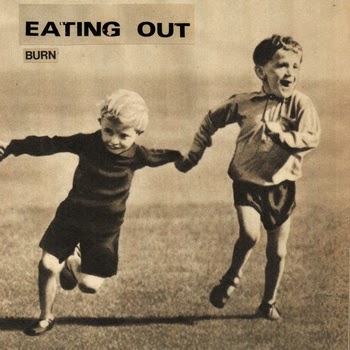 
Eating Out is what we would refer to as a Canadian supergroup, mostly because it features members of some of our favorite West Coast punk bands Nü Sensae, White Lung, and Peace.

Eating Out started in 2010 when Nü Sensae drummer Daniel Pitout wanted to get his frontman mojo going. He recruited his own guitarist Brody McKnight, Geoff Dembicki of Peace (drums), and Mish Way of White Lung (bass/vocals) to back his pop-rock songs. Last year, the band released a seven-song EP on California labelBurger Records and now have graced us with their debut music video, “Burn.”

“When I was writing the concept for the video, I was inspired a lot by alternative music videos from the 90s that I grew up watching on VH1,” says Pitout. “Bands like Smashing Pumpkins, Hole, etc. Those videos used to feel more like movies or stories [and are] really nostalgic and beautiful, which I never see much of anymore.”

Directed by Cody Fennell and Liam Mitchell, “Burn” follows a bunch of kids as they all try to meet up at a party. Every stereotypical character from every 90s movie is present, including those bitches from Clueless.

“We had over 40 cast and crew involved in this video,” notes Pitout. “I think everyone was just super excited by the idea of making a video which is essentially about youthfulness and being a bunch of weirdo teenagers, which we all were and still are.”

Eat your heart out, Billy Corgan.(Noisey)