COURTNEY BARNETT. How to carve a carrot into a rose 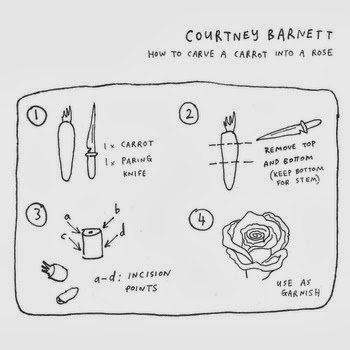 
The term ‘slacker rock’ follows Melbournian Courtney Barnett around, and this puzzles me. The rocking lass has recently performed for Triple J’s Like A Version, collaborated with Jen Cloher, supported the likes of Big Scary and Something For Kate on national tours, and released a new EP. Slacker? It doesn’t quite do the trick.
How To Carve A Carrot Into A Rose is a product of her recent work. The EP opens with the smoky ‘Out of the Woodwork’, Courtney’s usual breezy style coated with bluesy piano. The song builds to a wonderfully cluttered finish, the piano tumbling over itself. The sulky mood softens with the jangly percussion of ‘Don’t Apply Compression Gently’, but the direct comments still hold a scathing edge: “I’m not individual enough for you, I replicate the people I admire, but at least I’m not bitter and sad.” This combined with her relaxed delivery on vocals makes for a tongue in cheek coolness, the raised eyebrow almost materialising through the speakers.
My favourite lyrics on the EP can be found on ‘Avant Gardener’: “The paramedic thinks I’m clever because I play guitar. I think she’s clever ‘cause she stops people dying.” The chilled tempo and lingering guitar licks create a deceptively chilled atmosphere for the almost-comical story of what happens when you decide to venture outside. The groove quickens as the rock kicks in on ‘History Eraser’ and ‘David’. Courtney’s vocals take centre stage on final track ‘Anonymous Club’; for the previous five tracks they are present but not upfront. The soft murmur of guitar and drums bask in the background. I don’t know how to produce the words to describe it but the eerie distorted guitar make the track, conjuring imagery of warm summer nights, orange street lights ambling past from the view of a car.
How To Carve A Carrot Into A Rose simmers with self-deprecation, wordy lyrics that she effortlessly wraps her tongue around and fuzzy riffs that float around you like dust; she is, as my mother put nicely “Patti Smith with a tune.” How To Carve is a familiar return, a warm welcome to arms of old yet proving to be an incredible boost for Courtney’s fanbase. Courtney sets herself apart with the down-to-earth pathos that saturates the EP, blending together rock, blues and surf. It radiates warm beer, sitting down with old friends in a yard with overgrown fruit trees and staying up late, doing absolutely nothing on a typical Australian summer’s day. Perhaps now I can understand the term ‘slacker rock’.