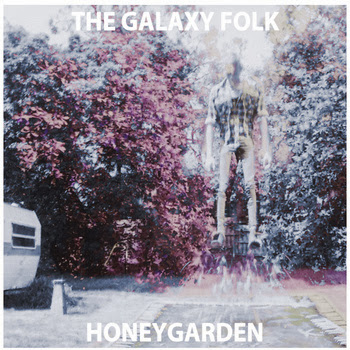 This winter was another hard one for me, and then it ended on a particularly rough note with a whole bunch of life stuff that I shouldn’t talk about in this context. I have been forced to remember the transience of life, the lasting influence of love, and the power of creative expression. These are good things to remember, but it was a hard few things that lead to it. And it’s been cold. It’s been rainy, and windy, and grey as fuck.

But a few days ago, the sun came out, and the skies were blue again. And then, on the second sunny day, a dude I know declares that a project he played some guitar on’s new EP is up on bandcamp (10” vinyl available soon), and I went and listened to it, and wouldn’t you know, it was the perfect thing: perfect for an emergence in to spring, and perfect for a re-emergence in to my own sense of wellbeing. It was relieving to have this album all up in my ears as I went about my business on these sunny days.

Ambient and dream-poppy, with a twinge of the swamp-sound that bubbles under Melbourne’s musical landscape, this predominantly bedroom-written album is a bit darker than similar styles I’ve been hearing coming out of other cities in recent years. Hell, I’ve never actually heard a slacker/dream pop band from Melbourne before, so I’m pretty fascinated by this. It’s got layers of pretty things, and nice reverb, and twinkling stuff and one track (“Down Under”, the stand out track for me) even has guitars that sound like waves rolling along the coastline, if waves were more melodic than percussive.

Angus Bell is the dude behind The Galaxy Folk, joined occasionally by collaborator Isaac Wright, with instrumental contributions by Alex Burt, Abi Wright, Cale Foley and Mike Lillis in both live and recorded situations. Bell makes pains to emphasise the “electronic” nature of these recordings: “This is not a representation of a band, this is an electronic album”, I suppose for the sake of differentiating the act of writing/recording from that of performing. It’s a different feeling, and you can tell by these sounds that this guy takes his feelings seriously.

He keeps away from the noisier, fuck-it-all attitudes taken by many of his musical peers, though he is just as driven to express his disaffected youth-ness. Instead, Bell has withdrawn into a private world for his colder, darker moments; it seems aggression just isn’t in his nature, which is a seemingly rare trait in the circles I met him in. The melodies are wistful, playful, lovely, and relaxed, though tinged with a soft dispiritedness…

I believe him when he says on the band’s Unearthed page that: “the music gets me through”, because amongst the nice prettiness, I can also hear the bleakness of addiction. I can hear the needles that plague too many friends, and the years of hangovers, and the cigarettes, the depressive cycles and anxious thoughts. I can hear sleepy disillusionment. I can hear a struggle to be heard clearly, to express freely, to find meaning in his existence. It is a sweetly personal collection of songs, but it’s also a straight up chiller if you’re in to the poppier, cuter side of music making; especially if you’re a fan of Galaxie 500 or Seabear.

I asked Angus a few questions about the album and his background, and I think his straightforward response, which I’ve edited a little for make-benefit-reading online, reads better as a whole chunk than in broken up bits throughout the rest of this review:

“My dad played in a couple of bands in the 80’s. I remember he was still rehearsing in a band called (might have been) Beargarden when I was pretty young. I remember vividly when they were jamming in our study- I was playing along with a plastic Stratocaster with no strings, and my older brother was shredding like Warren Ellis on his violin.

I was given a guitar for Christmas at some stage in 90’s, still riding the wave of Nirvana. “Come as you are” was the first riff I learned (little fact: Kurt Cobain killed himself on my birthday). Did a couple of years of mild guitar lessons in primary school, grew some pimples. Then ended up in a pseudo-reggae band with some printing factory work colleagues. Alex, Isaac, Cale, Bad Fingers and Moisty had all started up a band called “Cordyceps”. I somehow convinced them to let me be their “drone machine” player. Every song went for about 15 minutes. Alex even had a beard at the time (Tahlia’s note: Alex no longer has a beard, and I can’t imagine him with one; it would be weird).

Around this time I got pretty into song writing, and just started experimenting with recording my own songs at home. I experimented a lot with layers and layers of guitars and vocals, and obviously reverb, and got pretty obsessed with it.

I recorded a couple of EPs, and by the time I wrote an album I had the name “The Galaxy Folk”. I started up a 3 piece band, with the intention of playing the songs, but as the band grew we kind of just started playing our own kind of thing; it seemed a little sterile just to make everyone play exactly what I did for the sake of the acid test.

At the end of the day, I’m still making songs at home and making different songs with the band, I enjoy them both for different reasons; its just some kind of hybrid I guess.

In this day and age there is no need to spend all your time and money in a recording studio, with little resources you can pretty much do whatever you want. And I guess that’s what its about.” (Cool Perth Nights)