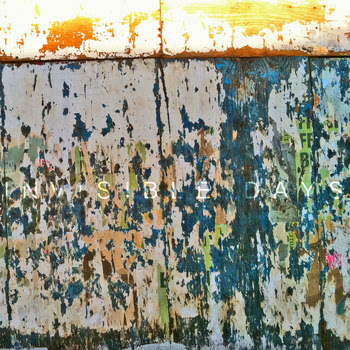 
Brooklyn’s Invisible Days are a simple band, a trio whose two favorite things in life are “hamburgers and volume”. But over the course of just two releases, the Polaurora EP and the “Solitary Time” b/w “Stewards” single, vocalist-guitarist Sean Finnigan, bassist Alex Koch, and drummer Michael Petrucelly have taken that easygoing approach and forged a deceptively intricate blend of shoegaze. Inspired in part by ’90s pioneers like Ride and Stone Roses and contemporaries like Deerhunter and Kurt Vile, their sound is as assaultive and chaotic as it is poppy and alluring. For a taste, the band have unveiled the B-side single “Needles”.
While other entries in the catalog better display their affinity for dissonance, this latest number is firmly rooted in a pop tradition. The strummy guitar that slowly flows along, the dreamy, quasi-sexually ambivalent harmonies, and the overall breezy tone make for universal accessibility. But pervading that poppy core is an intensity and sense of restrain, as if any moment the dam could burst and out pours layers of righteous feedback. It’s that kind of subtlety and playfulness that makes their noise-rock more than mere bedlam.(Consequence of sound)