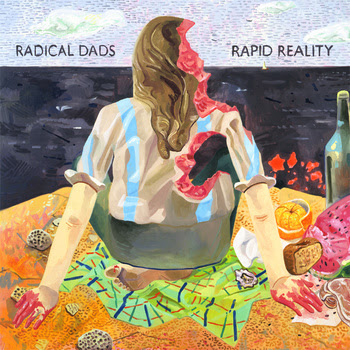 Radical Dads are the kind of rock band that might, for a second, remind you of some other rock bands you love. Scrappy, angular rock bands. Bands on the edge of chaos but locked into big riffs and sweet melodies. They may remind you of others, but just for that second. Then singer Lindsay Baker howls the word “disintegration” in opener “Mountain Town” and that’s what happens to those comparisons, they fall apart. Rapid Reality, the band’s new record, is exciting and unpredictable. This is a band with sharp edges, as on “Mountain Town”, that can shift to jangling energy (“Pink Flag”) before blindsiding you not by getting faster, but by getting bigger and more spacious on the excellent title track, the wandering “Marine Layer”, and—perhaps their finest moment here—the expansive opus of “Shackleton”. In just their second full length, the band has reached a remarkable height, and sounds much bigger and more varied than its three-member, guitar-and-drums set up. Radical Dads prove you can be scrappy and still be ambitious, and that while some bands are happy to be just another band in Brooklyn, some prefer to sound like a band from anywhere, that can go anywhere, and do virtually anything. Radical Dads is that band, which is why they’ll remind you of other important bands, until they prove to you they are their own kind of important. http://www.popmatters.com