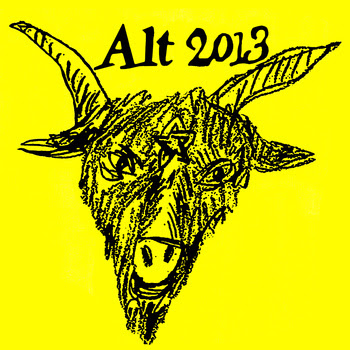 Boston noisemaker Dylan Ewen is back with a four-song EP of carbonated fuzz pop. Last fall Dylan put out his album Fort Worthless, a cheeky little album full of snotty youthful angst that I liked a whole lot.

Following in the same vein as that album, this new EP Alt 2013 touches on a lot of the same subjects: girls, failed relationships, self-deprecation and occultic imagery as reappropriated by a third-grader. He even follows up “You’re a Bitch" from Fort Worthless with “You’re a Bitch Pt 2 (Still a Bitch)." So that shows you a bit where Dylan is coming from. As with Fort Worthless, everything here has to be taken with a grain of salt. There’s a thread of humor and self-awareness that runs through all of Dylan’s music that makes any of the perceived immaturity go down easy. Basically it’s just a fun, catchy collection of songs that don’t take themselves too seriously. So you shouldn’t either. http://cactus-mouth.tumblr.com