THE BRAINSTEMS. No Place Else 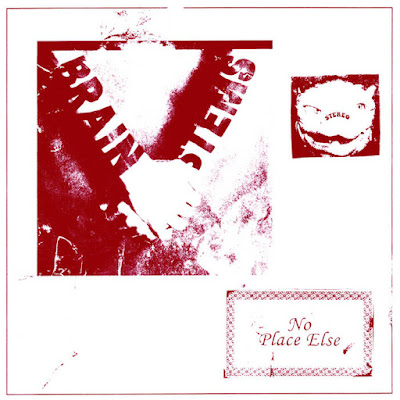 
From St. Louis comes a true garage-punk/post-punk wonderland of an album from The Brainstems called No Place Else. With the opening song jamming true punk sloppy and the lyric of "I’m a mother fucking stallion" sung in a sort of nerdy punk voice that leads to another lyric of eating a croissant, there is no resisting this band. We need more bands like this.
The Brainstems didn’t begin too long ago and after listening to this one you can forgive them for starting out as a Ty Segall cover band. There is a heavy dose of irony and parody in their punk sound but after the first few songs, by God, this band gets better, with vocals very similar to the Parquet Courts, and St. Louis-specific landmark lyrics addressing racial redlines and the Art Museum and such, that are as deadpan, poetic, and observant as Ought.
The Brainstems aren’t just a punk band.  They jam along like the Meat Puppets and Butthole Surfers and any number of those seminal punk bands from the Ork label in the 70s.  But even on a near-ballad like the track ‘What it is’ they still capture that Lou Reed/Jim Carroll band sound, if not with a pleasantly rockabilly finale.  This is a modern scuzz band at its finest.
If your catalog is missing a bang it up garage band album of the finest order this year, give The Brainstems a listen.  A top album of 2015. (Jim Harris)

For over thirty-three minutes, The Brainstems‘ new album, No Place Else, blazes with unrelenting garage rock, post-punk rock, and indie rock. There are very few moments to catch one’s breath, as the quartet from St. Louis fire one blistering song after another. The tracks range from the outrageous and amusing (e.g., “Keep It Together” about losing one’s senses and how even tying one’s shoes becomes a chore) to serious topics (e.g., “Redline” that speaks to societal ills). It’s an approach that Parquet Courts have utilized to great success (with their latest album, Monastic Living, being an exception).
The Brainstems also incorporate the fire-brand of post-punk / garage-rock that Canadian bands such as METZ and Japandroids have employed. “Untold Heights” is a full-frontal assault on the senses with the colliding guitars and the exults of the band’s four members. The track then seamlessly bleeds into “Warm Skin”, another high-intensity, cathartic track. By now, you might be breaking into a sweat.
While most of the songs are fast-paced musically and lyrically, the band does sprinkle in some old-fashion rockers like on the awesome “Simple Joys”, which finishes with a cascade of fuzz and distortion. “What It Is” also demonstrates that The Brainstems’ influences and sound can extend beyond that of Parquet Courts or METZ. On this slow building and 70s-esque rocker, The Velvet Underground seems to be channeled. The tickling of the guitar strings and the gritty sound of the Manchester scene can easily be heard. “The People’s Joy” also has a Lou Reed vibe with the deadpan vocals and the cool, melodic undertones. “Time To Ride”, meanwhile, is a surprisingly melodic rocker, an easy-on-the-ears choice to end the album.
One could say that The Brainstems are a bit all over the rock map on No Place Else, but the songs are clever and the entire album is a blast. It’s the kind of album to turn on when one needs a boost or just feels like thrashing one’s head. Who needs a Red Bull when No Place Else provides the same jolt of energy? (therevue.ca)
Publicado por Damià Boscana en diumenge, de desembre 20, 2015