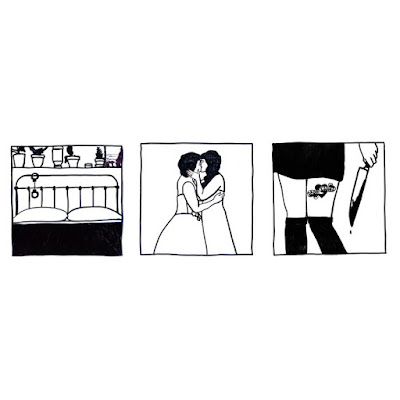 Unapologetic, irreverent riot grrrl punk is having something of a renaissance, and I couldn't be happier. Greensboro, North Carolina garage rockers Daddy Issues are squarely ensconced in this latest wave (they literally have a song called "Riot Grrrl," in case you missed the memo), and the beachy jams of their new LP Fuck Marry Kill take tongue-in-cheek defiance to a fantastic new level.

There's really no better introduction to the band than the lyrics of the album's opening track, "Glue Sniffer." In belted, hand-banging shouts, they admonish a friend to ditch her loser of a boyfriend: "He's in his mid-thirties and he ain't got a car / Spends all his money at a cheap-ass bar / He's always on Tinder but he can't get a match ... He ain't a catch." It's always a good sign when you end up chuckling to yourself within the first two minutes of a record, and the music itself is utterly infectious.
I'm reminded a bit of Chastity Belt's latest album, Time To Go Home, except where they tended to take a more serious approach to the content of their songs, Daddy Issues eschews most of the straight-faced stuff in favor of a more playful vibe. In fact, "Babehammer" almost feels like an alternate version of "Cool Slut"—where the latter directly addresses double standards concerning promiscuity, the former goes for more of a flippant, "you wish you could handle me" kind of empowerment.
Beyond the feminist overtones, though, Daddy Issues knows how to rock. Their songwriting is a flawless love letter to surf punk and DIY rock (bringing to mind other contemporaries like Hinds), and is digestible enough to play on repeat for hours. With only three tracks that break the three-minute mark, the album is as lighthearted sonically as it is lyrically. Fuck Marry Kill is a seriously fun record, and though its release date says November, it's sure to put you in a summery mood and keep you there. (Will Shenton)
Publicado por Damià Boscana en dimecres, de desembre 02, 2015