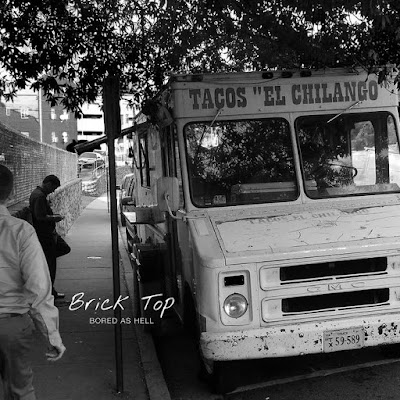 Last summer, D.C. punks Brick Top released a sparkling five-song demo that far outstretched the band’s relative inexperience. The hooks pierced deep and the lyrics beguiled its age. The band infused real darkness into its pop-punk; far more Jawbreaker than NOFX. On “Nothing On The Inside,” singer Chris Issapled for help in his proverbial examination of his own internal emptiness. “And if I find anything,” he sang, “it will be blind luck.” In D.C.’s robust punk community, there was little else quite like it.
On “Bored As Hell,” Brick Top’s first official EP released online last week, the band continues to mine the existential depths for inspiration, and it finds plenty. The record’s first three songs speak again of scouring one’s own darkness for insights; of looking down from a high perch and deciding to jump; of the mundane, slow-motion trudge into middle age and seeing the inevitable conclusion. “I’ll probably have a heart attack before I’m 65/ By now I’ve lived out half my life but time keeps flying by,” Issa sings on “Heart Attack.”
The words describe such a human experience, there’s a real “you’re telling me!” relatability on the other end of the speakers, and much like Long Island punk stalwarts Iron Chic—perhaps the band’s closest musical kin—the deft, often bright pop-punk is the Kool-Aid that helps to swallow the pill. “All the songs on here touch on those themes a bit I think, that feeling of not knowing that the path you're on is the right one and grappling with that,” bassist Matt Carrier says.
But midway through the six-song EP,  light pierces Brick Top’s dreary sonic landscape. Musically, the pace picks up. The distortion smooths over. Gruff vocals brighten and return to more traditional pop-punk octaves. Recorded at Noisy Little Critter studios outside of Philadelphia—where kindred spirits Spraynard and Sundials cut records, among others—the band deftly shifts tilts from the album’s rough beginnings to its smooth exit. The shift was intentional, Carrier says—the product of collective songwriting among the band members. “Given the songs we had, we wanted to have a clear transition, grittier to a little bit sunnier, between the A and B sides,” he says.
Sunnier might be a stretch, but lyrically, there are lighter moments. On the measured title track, guitarist and songwriter Chris Baker describes quiet seclusion as a chosen destination, away from poisonous social circles and the pressures they apply. Who needs all these kids? he asks. The couch is just fine. Like Brick Top itself: The darkness, Baker finds, can be a happy place.(washingtoncitypaper.com)