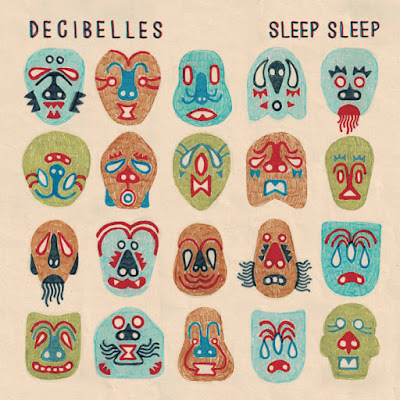 
Kelly Kirwan
Say “New wave” to certain people, and you may just get your ass kicked. There’s the infamous tirade of French Journalist Kickboy Face (AKA Claude Bessy), explaining the post-punk, pop inclined genre was a figment of the imagination (and yes, that’s putting mildly). It isn’t surprising that one of the subsets of punk sparked such intense reactions, with their synthesizers and experimental approach—because the genre as a whole thrives off fierce, in-your-face opinions against the mainstream.
But whether or not you believe electronic elements dull the music’s hard edge, you can’t deny the clout of artists and bands like Billy Idol and Siouxsie & the Banshees. Not to mention the more recent new wave/punk inspired band, Decibelles, and their fresh EP Sleep Sleep.The three-piece, all-female troupe is a Lyon import (so “cold wave” may be more geographically specific when describing the movements that influenced them). True to their punk roots, their ensemble is stripped down and straightforward—Sabrina Duval and Fanny Bouland divvy up the vocals, along with their respective guitarist/drummer titles, as Emilie D’Ornano rounds out the trio with bass. Their tracks are frenetic and keyed up, especially the album’s eponymous opener.

"Sleep Sleep" wastes no time easing you in with an introduction—you’re plunged full-force into hard-hitting drums and guitar riffs. The lyrics are delivered in an undeviated, French-accented chant, “Dreams make my visions real / Everyone says you’re really strange” and embody that mindset of embracing alienation. Being misunderstood isn’t something to shy away from, it’s proof you’re one up over society. The EP’s agitated, confrontational feel makes its titles tongue-in-cheek. "Sleep Sleep" is not a sweet little ballad, lulling you into a dream state, just like "Glitter Sea" doesn’t evoke picturesque images of calm, sunlit oceans. These songs are taut and tense, evoking a kind of head-thrashing hypnotism.
One of the standout tracks is "Baloo Naked in the Jungle," which weaves hollow, percussive beats with light cymbals, as the Decibelles repeatedly work themselves into a dither after brief moments of relative calm. (Extra points if you caught the Jungle Book reference, which actually carries some anti-establishment themes if you take a hard look at it). Then there’s the album’s closer, "Vol de Nuit"—“Night Flight” in English—a five-minute track of low timbres that’ll build a knot between your shoulder blades. The first flurry of vocals comes at the one-minute mark with a flit of shrieks, and then continues on with its sullen, on-the-cusp-of-mayhem instrumentals. It feels like a feverish anthem for after-hours anarchy, and dispels any doubt about the Decibelles punk standing.
The electronic, power-pop nuances of their music haven't left them with a blunt edge. They’re still sharp tongued and fast-footed, and definitely worthy of your attention. And, let’s face it, whatever the controversy may be over “new wave” music, in true punk fashion, these girls probably don’t give a shit about labels