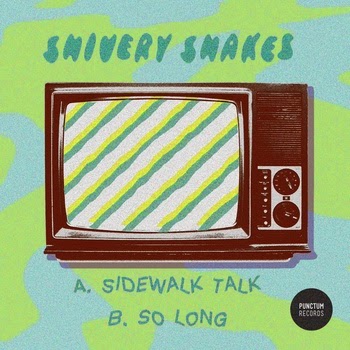 It's been a great year for Austin's Shivery Shakes. From having a day named after them by Austin's mayor Lee Leffingwell on June 27th of this year, to releasing their brand new 7" as the inaugural release for the newly founded Punctum Records. The jangly guitar-driven surf pop from Shivery Shakes builds upon paisley 1960′s rock ‘n’ roll with a neon-laced 1990′s aesthetic for a sound that defies nostalgia. Their latest 7” single (Sidewalk Talk/So Long) makes a statement on what came before, while creating something distinct for this particular time.
In 2011, Shivery Shakes we’re sewn together by escapism and happenstance from members of two Austin bands, The Bubbles and International Waters. In March of 2012, they released their eponymous EP to local acclaim, which they supported on a national tour with fellow Austin-natives, Bobby Jealousy. Later in 2012, Shivery Shakes played official parties for Austin City Limits Fest and Fun Fun Fun Fest, supporting acts such as Surfer Blood and The Soft Pack.
In 2013, they continued performing and opening for national touring acts while they recorded their debut full-length to be released in 2014. In the meantime, their new single ‘Sidewalk Talk b/w So Long’ is out now through Brooklyn label Punctum Records and will be accompanied by a music video shot and edited by the band. (Jeremy Daniel)