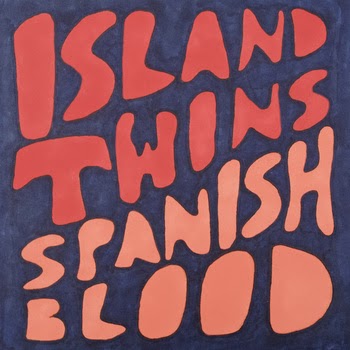 
I love writing DANGERZONE because despite being a “weekly column” I give NO fux and do whatever I want. FTW AMIRIGHT. I mean it’s called “Danger Zone” lets up the danger you fucks. TWO POSTS ONE DAY WHAT SHE ORDER FISH FILET

Island Twins are (currently) Meagan (bass, vox) and Erik Brauer (guitar, vox). The drums you hear on their new album, Spanish Blood, are played by Tony Del Cid. If you’ve ever seen Island Twins he was that attractive man sitting behind the drums with one sleeve droppin a Mary Poppins groove for 30-40 minutes. TONY you know I love you and support you but Island Twins just ain’t right without you, homie. It’s almost like… I dunno, like they’re missing a tight as fuck drummer who also happens to be the man or something… call me, maybe?
Meagan and Erik bounce lyrics back and forth throughout all 8 songs which is nothing new. Erik leads most songs with Meagan harmonizing like the angel she is in the background. Except for “Can You Dig It?” which Meagan wrote and sings all by her damn self. I think it’s about a dude or something? It might be about a dude. It might be about a cat. It might be about not going in water past her knees.
“Yes Way/ Black Mass” is my favorite if I have a favorite (I totally have a favorite it’s “Yes Way/ Black Mass”).
OK enough about me because I don’t matter and I know you know that go listen to Spanish Blood I got a bottle of wine to finish LEAVE ME ALONE DON’T TOUCH ME@mavyentco