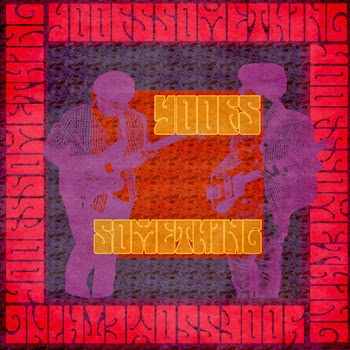 
The debut album by Bournemouth duo Yoofs has been one we've been looking forward to. Their single 'For Her' promised jangly indiepop. Not exactly the start of a whole new movement, but they did it well. Then came recent single 'Toy Organ' which remained in a similar realm, but added the slightest of psychedelic twists, something which led us to believe that this wasn't just another straight-up guitar-pop band after all; they may have more ideas than that, we might not get a dozen variations on the same theme. We guessed right. Both those singles are included on 'Something' and it is indeed a dozen songs long, not that that was a particularly crazy bet, it's a pretty standard length.
Those two terms, indiepop and guitar-pop, are relevant at every point here, but Yoofs do give us that welcome deviation as we journey through classic jangles and '60s-influenced pop songs, all done in a timeless indie fashion. Typical of this is 'Do You Feel The Same?'; it's one of those songs that could have been written at any point in the past 50 years, and this is a compliment, not a criticism. That psych aspect doesn't take long to appear either, with second track 'Shady Acres' sounding like the work of a band on classic independent labels such as Postcard, Sarah and even New Zealand's Flying Nun. 'It's A Secret To Everybody' combines that bedsit indie with the credible British pop/rock of Squeeze, giving us yet another dimension to their writing skills. The title-track is more classic pop; it borrows from folk, psychedelia, and the mellower parts of the back catalogues of Teenage Fanclub or the Paisley Underground movement. For other songs like this you could look to 'The First Time' (a personal favourite) or sentimental closer 'It's Been Fun' (or most of the album, frankly).
There are points on 'Something' where Yoofs take things even further, again this is a plus point. 'Deja Vu' pulls in a little blues and a little country. The result is part Simon and Garfunkel and part early Neil Young, with the laid back vocals of modern faves TV Girl. For a band who have such a loose, almost lazy vibe to them, they pull off some neat harmonies. The clipitty-clopitty 'Take It From Me' shares some of these fixtures. Musically it could be a The Mamas & the Papas cover given a modern dusting down, but the with just two voices it doesn't share that band's vocal prowess (to be fair, that could be said of pretty much any band). They delve deeper into the garage and freakbeat scenes on 'It Ain't Over ('til It's Over)'; again it's borrowed sounds, again it's a great track. 'Show Me The Money' fits the very same description, albeit in a different way. Whether or not Yoofs have actually listened to, studied or tried to replicate any of the groups mentioned above we can' tell you, but whether they have or not, it doesn't really matter when the consistency of your material is as good as this.(The Sound Of Confusion)