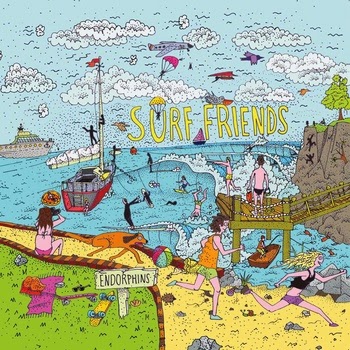 Auckland based Surf Friends, Brad Coley and Pete Westmoreland may have been somewhat economical in the naming of their band but their sophomoric record, Endorphins continues to prove they're anything but frugal when it comes to the task at hand. A stack of drum machines, keyboards and looped samples went into the creation of Endorphins and the result is greatly more than a sum of its parts.
That's not to say they didn't have some help along the way. The Clean's David Kilgour dons an effects laden guitar and contributes vocals for the strung out psychedelia of stand out track 'Mexico' and the album was even produced by Nick Roughan of seminal post punk Kiwi band, The Skeptics. Accordingly, a robust indie and post punk feel pervades throughout the record with just the occasional two-part harmony and lyrical yearnings for the sun hinting at the band's bleached blonde surf roots.
From the intoxicating new wave mysticism of ‘Clean Deers’ to the drawn out guitar-pop of closer, ‘Yourself’, Endorphins is a record that both surprises and delights throughout. Just as appropriate at the beach as a basement club, this is a genuinely three dimensional record not to be overlooked this summer. (Paul Larsen)