JACKSON & THE WARGONAUTS. The Summer's Eye 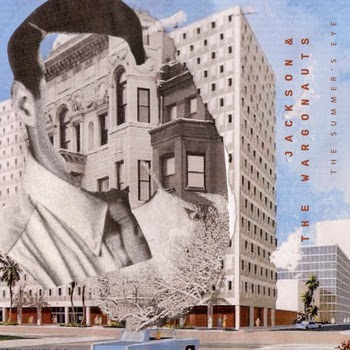 The debut release from Cypress, California's Jackson & The Wargonauts. The band is driven by the songwriting skills of Jackson Wargo, a fellow who has a remarkable way of crafting melodies and lyrics. When we read in the cover letter that the band features ten members we were concerned that this album might be one of those where too many cooks spoil the broth. But upon spinning the disc we found that the exact opposite is true. Instead of sounding overproduced or cluttered, these tunes are presented simply with each musician adding only what is necessary or essential for each composition. The Summer's Eye offers a pure shot of pure pop, with no artsy noise getting in the way of the feelgood melodies. Wargo's songs have a surprising amount of commercial appeal...and yet they are a far cry from generic twenty-first century pop. Ten well-crafted cuts here including "Fine Tooth Comb," "Pelican Hill," and "The Summer's Salt." Excellent vocals from start to finish. Great pop stuff delivered with heart and soul.(baby sue)