THE YAWNS. The Yawns 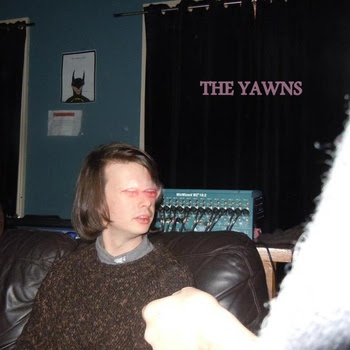 
The point of a new music blog: to point people in the direction of new music they might like that they otherwise might not have heard. It's fun, I like doing it, but I tend to not find enough time to commit to it properly which results in a blog updated sporadically featuring music that turns out to be not that new after all. Still, let's ignore that this album from the Yawns has been on bandcamp for a good few months. Let's ignore that the band have been around since 2011. Let's ignore that I've been listening to it and not getting around to writing about it for that time. Let's ignore that this blog post comes just as they finish a tour of the UK rather than, more usefully, just before they start one. Let's ignore that both Gold Flake Paint and Song By Toad managed to include it in their albums of 2012 lists. Let's ignore that even R. Stevie Moore liked them before me. Let's just focus on the fact that this is a really bloody good album.
They're a band from Glasgow apparently made up of some of Copy Haho (not that that is especially important) who write jangly, woozy, slightly shoegazey pop songs with lovely guitars and ace vocals and stuff like that. It's so good that the lovely people of Records Records Records decided it deserved to get pressed to vinyl. It does. Enough blabbering, listen below.(Basement fever)