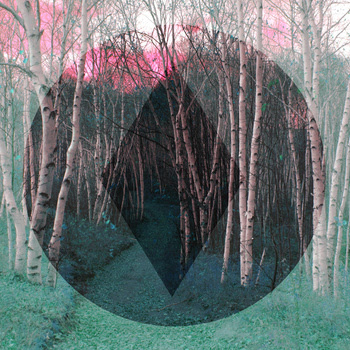 Throwbacks are easy, and arguably essential in the life of music, but they aren’t always a bad thing in the music world. Most people revert to nostalgia because they want to relive times past, or because it’s simply good to stay put in one place for an extended period of time, well after it has moved on. As much as people berate it, most of the time it’s harmless and – perhaps more importantly – fun. Hipster/geometry jokes aside, Sudbury five-piece The Almighty Rhombus are quite obviously a blast from the past, but they sound like their having nothing but a great time when hurrying their way through their miniature own numbers.
For all the content available (just this one self-titled EP at the moment; a full length called Lucid Living is due out in the summer), there’s undeniably something pocket-sized about the group: the five tracks here take up just twelve minutes, and just one track teeters over the three minute mark. In fact, that’s perhaps the only main gripe with the EP, in that’s so short and sweet. Listening through, it’s easy to dive in at any moment’s notice, but when you do, it can feel fleeting as you reach the end of the disc and still remember hitting play a few minutes beforehand.
Still, as said, those moments that entice you to dive in are plentiful. “She Didn’t Want Me To” begins with the EP’s most obviously nostalgic moment, fading in some fuzzy guitar, like a tape from a decades past playing in the background before the band get kick-started. From there they dose the listener with guitars and organ as the rhythm section steps back a little to let the other two have it out. When the band all come in for backing vocal duties, it sounds like they’re cheering them on. Ninety-second “Even Though” is just as likeable, if not moreso, not wasting any seconds to say what it has to, with a dose of those fuzzed-out guitars coming back into the picture.
“Kamikaze” offers the EP’s only respite, fading through from “Even Though,” but it sounds stodgy more than anything else; singled out it can be a bit of slog to get through. Before long, though, the band return to release highly sugared doses of peppy energy on “Honest Liar.” With riffs that seem to blow everything else preceding it out of the water, it sustains the momentum and sounds like the band charging forward. The song also has the best lyrical features to it, playing out with a homophone or two at the end of the verse: “You’re an honest liar ‘cause the lie you tell are white.” You could hear it as “wise”, too, but more than likely it’s “why” so as to fit in with the next line which descends quickly down the key (“you don’t want to hurt me”). It’s probably silly and unrequired to read into the lyrics here, as they tend not to verge on anything ground-breaking (“Make sure and tie up your boat/ Or else all your dreams will all float…”), instead just remaining simple enough to sing along to after one or two spins, but they’re there to play with, too, should you want something else to do with the music.
Comparisons to the likes of Fang Island are such are easy to use here, and they’re in no way off (especially during the pummelling chug on the latter side of “Even Though”) but again, going back to the brevity of the whole thing, it feels unnecessary to bother with such things. It can be lastingly satisfying when a great release from power-pop/rock (or whatever genre you want to call it) comes along, and while The Almighty Rhombus EP isn’t Fang Island, there are many worse ways to spend twelve minutes of your life. And if you give it the time it asks for, then you might find yourself reliving those same twelve minutes over and over.(beats per minute)