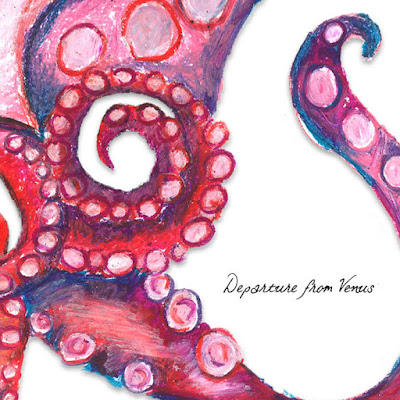 College and young adulthood are all about trying on as many different personas and attitudes as possible until you find one that suits you. It’s a terrifying, often emotionally devestating game! Madison Klarer understands this well — the song’s on ROMP’s excellent debut Departure From Venus range from overwhelmingly posi (“I don’t care what you might say/ This is gonna be a great fucking day” on the world-conquering “Avoiding Boys“) to pissed-off and seething (“Get Off The Scale”). These wild mood swings are part of growing up and blindly feeling your way around in life, and ROMP does so with a lively spirit and propulsive energy that’s difficult for a lot of bands to capture once, much less to keep pounding away at for an entire record. But there’s no dead space on Departure From Venus — it’s hard hit after hard hit, and the New Brunswick four-piece harness straitlaced power-pop to dramatic effect, stumbling around at an assured but breakneck speed.

The crux of the record rests on “Come Undone,” a self-destructive and desperate plea. “Sometimes I like laying on the floor to see things in a new perspective,” Klarer deadpans on the bridge, the irony being that her character is most likely in fetal position on the floor in front of the toilet trying not to get vomit in her hair. The narrative of the song is sadly familiar to most: getting so fucked up around someone you like because you’re nervous and then hoping, even after making a fool of yourself, that they’ll want to get dark in the same way you like to get dark. Compatible faults. The invitation on the song goes as such: “I punished myself hoping you’d notice me/ On the bathroom floor of the first floor, I felt undone/ Hoping you’d come undone with me/ Please notice me.“

That acute sense of self-awareness plays out time and again on ROMP’s debut: Klarer writes in missed connections and miscommunications, repeating patterns and bad behaviors. “Thanks for saying hi that night/ Thanks for making me feel like, for a while, things might be alright,” she opens on “Naner Manor” (named after a New Brunswick underground venue), but that butterflies-in-the-stomach feeling quickly gives way to a soaring, “Hey, hey, I don’t know what you’re trying to say.” Closing track “Yapshutter” ruminates on where a relationship went wrong, when both parties were at fault for not saying how they felt: “If you knew what I was, if you knew how I felt, we could have glued it all back together again. If you only had some guts, if you somehow stood up, we could have had our own happy end.”

Happy endings don’t come often on Departure From Venus, though, and it’s that dissatisfaction that fuels many of these songs. On the title track, the deterioration of a relationship is framed in two separate verses. The first rushes with the excitement and anticipation of wanting to spend as much time as possible with someone you just met (“Running up the stairs of your apartment/ Collapsed onto your frameless bed”), while the next jumps with a similar nervousness, but this time because everything has become too settled and staid and the end is in sight: “As months pass, you’re not the same/ Now your bed has a frame/ My painting is probably somewhere underneath your bed…” That feeling of being destined to be and then eventually discarded is bookended by a frustrated cry: “Everyone says it’ll get better, but I don’t feel any better. Liars!”

Klarer’s wordy and incisive meditations are met with sprightly and aggressive pop-punk riffs. These songs rock out and aren’t afraid to show it — everything is urgent and thrashing, they build towards off-kilter and crashing climaxes. Take the frustrated screams at the end of “Get Off The Scale” (“What a fucking shame,” she snots off at the end of that one) or the heavy pounding of “Go Back To Bed”‘s wanting refrain of “I miss you.” Departure From Venus sounds like the band would’ve combusted if they weren’t able to play together. On On “Last Year,” Klarer states as much: “There’s something in my head telling me to sing these songs for fun/ Until a knife reaches the back of my throat/ And If I do say so myself, I better find somebody else to help me out.” ROMP is that somebody, and the band is obviously frustrated with life, but also have enough energy to make it seem like everything will probably be OK in the end if we keep pushing forward. Listen below. (Stereogum)