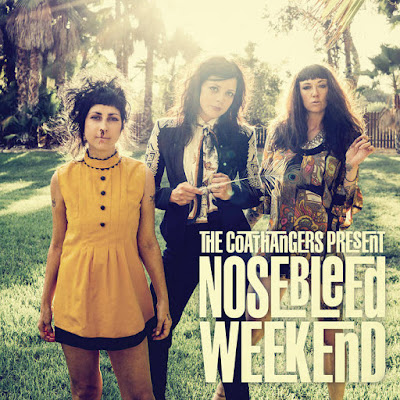 The Coathangers recently became the first band in some 35 years to make a record at Valentine Recording Studios, a North Hollywood landmark that once played host to luminaries ranging from Bing Crosby to The Beach Boys. So how did these Atlanta punks re-christen the studio’s vintage microphones? By squeezing squeaky toys into them. The chorus of “Squeeki Tiki” exemplifies what The Coathangers have been doing better than pretty much everyone for the past decade: blowing off the rules in the name of fun, and making damn catchy records almost as an afterthought. Their musical tool shed may be more richly populated now, but it’s still overflowing with the usual suspects: choppy power chords, single-note surf riffs, and some of the best soft-loud dynamics this side of the ‘90s.

What’s changed most obviously is their ability to use those tools. The Coathangers of yesteryear played so loosely — and so aggressively — that they nearly resembled an art punk band at moments on their 2007 self-titled debut. The aggressiveness never wavered on 2011’s Larceny & Old Lace and 2013’s Suck My Shirt, but the band’s sound tightened up like a pair of jeans tumbling around the dryer.

On their fifth and latest album, Nosebleed Weekend, it has finally popped out ready to wear. Credit the change of scenery (this is the first full-length made outside of the band’s Atlanta hometown) or the fancy-ass studio toys (rubber ducks notwithstanding), but really, this is a story of three bandmates sticking it out and gradually becoming more comfortable with one another. The 13 songs on Nosebleed Weekend communicate angst, anger, and regret by turns, but that feeling of comfort rests like a soft pillow at the very bottom of the mix, giving the trio enough confidence to explore corners of their sound they had never thought to unearth before.

Opening track “Perfume”, for example, exchanges their typical ferocity for something that burns slower and leaves a deeper impression. As she did on Suck My Shirt standout “Zombie”, guitarist and part-time vocalist Julia Kugel adopts a smoky croon that sounds like something you’d hear in a Nuggets-era pop song. It’s the closest a driving, mid-tempo rock song can come to a lullaby, reintroducing The Coathangers to the world not with a bang, but with a muted expression of how elevated their songcraft has become.

The song is probably too long by half, but it sets up a more serious tone that the rest of the album seems to push against or fall into line with. This time around, these women aren’t fucking around, even on overtly fun, playful tracks like “Hiya” and the aforementioned “Squeeki Tiki”. Nosebleed Weekend may not reach the manic highs of early Coathangers bangers like “Shut the Fuck Up” or “Nestle in My Boobies”, but it also makes it glaringly apparent that those songs were written by far less experienced musicians who still had a lot of room to grow. Here, they sound like they’ve finally arrived.

It takes seeing The Coathangers live to really understand how fluid the band’s dynamic has become. Kugel, drummer Stephanie Luke, and bassist Meredith Franco switch roles with the gleeful abandon of kids playing musical chairs, hopping onto each others’ instruments and trading turns at the mic. This camaraderie pays off in subtler ways on record; regardless of whether it’s Kugel or Luke taking lead vocals, each song sounds like it belongs to the entire band — and has the entire band’s force behind it. Luke’s throaty rasp (her nickname is Rusty Coathanger for a reason) is so commanding that she hardly needs help, but the overlapping vocals and three-part harmonies transform songs like “Watch Your Back” and fuzzy lead single “Make It Right” from mere storms into straight-up hurricanes.

It’s strange that, a full decade into their career, The Coathangers only now seem poised to break out. Then again, maybe it’s not so strange, given where they were when they started and how much they’ve been learning on the fly all these years. Even now, they’ve managed to retain a degree of volatility that most seasoned punk bands tend to lose after their fourth or fifth record. So what do we call them: rookies, veterans, wiseacres, professionals? By this point, it’s nearly irrelevant. The Coathangers contain multitudes, and with every album, they’re getting harder to contain.