TRIOLIAN. In Your Head EP 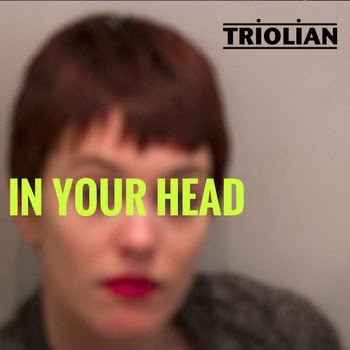 
Coming to us boxfresh from London (they got together in November, so in band terms are still very much in nappies) are Triolian, which if you think about it, is a somewhat puzzling name for a duo. Perhaps they have their sights set on recruiting a third member eventually, it may help when it comes to live performances. There may just be the two of them, but they have the sound of a three or four-piece indie-rock band, so how that transfers to the stage isn't clear, but they have live gigs planned. The title-track is a top way of marking your arrival; it's pacey, well-recorded, makes good use of the dynamics of sound, and is an all-round good tune. The title fits it nicely, as it does contain some barbed melodies that ensure it's not instantly forgotten.
With drums, multi-guitars and multi-voices, the pair must have recorded these songs in sections, yet they've captured the essence of a full band really well and you wouldn't know this was the work of just two guys. Adding a little funk to their guitar-pop is 'After Dark', but it stops short of diving into the '80s sounds that the music world seems so reluctant to let go; it's the never-ending revival but Triolian want no part in it. In fact, listening to 'Till The End' they sound more in tune with the spiky guitar revival of ten years ago, but it doesn't sound dated, all the EP sounds fresh and also very accomplished considering how new they are. Ending on a more indiepop note, 'Learn To Love' almost has a nostalgic feel to it. Make no mistake though, Triolian might be able to write quality tunes and they might be a guitar band, but they're not trying to be anyone else.(Thesoundofconfusion)