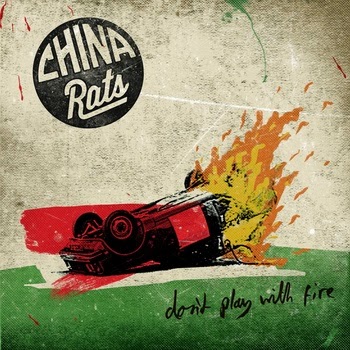 
The punk explosion that began in the UK in 1976 wasn't just to wipe the slate clean. There was a new generation of kids growing up who wanted something for them. This is something we know through reliable first-hand accounts. Unlike much modern punk, many of the class of '76 and '77 focused anger and dissatisfaction into their music; the bands that mattered had a message, and that message was aimed at the government and its grave failings. During the '70s (personally I was alive for a few months as an embryo, so can't speak first-hand) there was huge inflation, the three-day-week, caps on public sector wages and unions going on strike. The situation wasn't far from what we have now. Can punk music express the current dissatisfaction, or, like the rationing of electricity by the coal miners' industrial action, is it out of date and should be the reserve of dubstep, grime and so on? The music developed by a new generation.
Leeds group (and former Band To Check Out) China Rats answer that instantly on the 'Don't Play With Fire' EP. 'N.O.M.O.N.E.Y.' is a blistering, blitzkrieg of a tune and one which, while not having the venomous vocals of a Johnny Rotten, is tackling the similar situation with some style. As we know it's clichéd and worthless trying to "stick it to the man", the band avoid doing so, preferring to talk about more personal experiences. It's proper earworm material. 'Deadbeat' is based around the same problems, and the option of getting out of your minds rather than looking for work due to having "no self-esteem" (and probably no chance). Same shit, different decade. Those scratchy riffs keep coming, lifted by chiming guitars and a likeable vocal, not to mention very good quality songs; and 'Get Loose' talks of having "nothing to do".'Reeperbahn' nicks the drums from 'I Am The Resurrection' and heads in a brilliant indiepop direction, showing they don't just have one agenda. It's a real highlight and a quite beautiful song. Slightly changing tack again, they finish with the beat-group-by-way-of-punk 'Green Tears' and conclude what is a stunning EP. (THE SOUND OF CONFUSION)