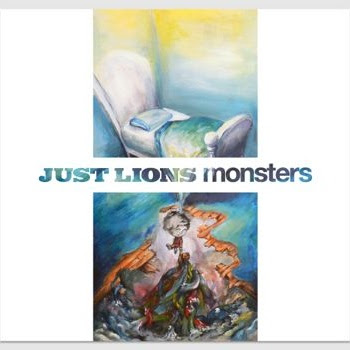 “Tonight, Portland band Just Lions welcomes Monsters into the world, a three-song EP that was a long time coming, due to what singer/guitarist Chandler Strutz calls “some truly shitty health issues that I’ve been dealing with.” As it turns out, three songs are plenty, as every track on Monsters is adventurous, melodic, inventive rock that doesn’t leave you wanting. The centerpiece, “Othello,” is thunderous, ponderous, and tinged with tragedy—it sounds like a much bigger band than the mere three-piece of Strutz, his brother Brady Strutz, and drummer Andrew Shepherd. (Chandler adds, “Andrew and I have been in bands together for over a decade. Brady and I have been in petty fights about nothing for over two decades.”) The tracks on Monsters were initially part of a full-length, but when Chandler fell sick, they decided to release these tracks now rather than wait. Fortunately, Chandler is doing well and Just Lions sounds great, with the solid Monsters to show for it.” NED LANNAMANN