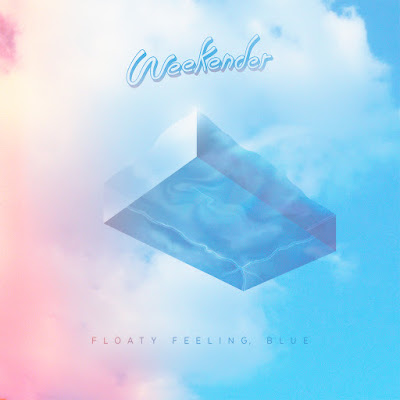 
Philadelphia’s Weekender, led by songwriter Derek Sheehan, have announced their sophomore EP, Floaty Feeling, Blue, will arrive January 15, 2016 on PaperCup Music, premiering the title- track from the record today via IndieShuffle – share via Soundcloud. Floaty Feeling, Blue is a record of dreamy, textured pop tunes, soaked in psychedelic effects, recorded at Fancy Time Studios with co-producer Kyle “Slick” Johnson, who Sheehan worked with on the band’s debut, Spanish Peaks. Over the past two years, Weekender have built a loyal, local following, becoming the band to support touring acts coming through town, including Future Islands, The Growlers, Nothing, Surfer Blood, Israel Nash, Peace, and Field Report, amongst others.
Floaty Feeling, Blue is a natural progression for Weekender, with Sheehan now surrounded by a group of musicians, ready to take his vision forward, including Jesse Petas (drums, percussion), Steven Rosplock (Guitar, Vocals), Brendan McGeehan (Bass), and Dan Mudd (Synthesizer). As the band has shifted, the sound has progressed with the addition of heavy synthesizers. “I bought two ‘80s analogue synths, a June 106 and Prophet 600,” says Sheehan, “adding a lot of the finished tracks. The textures of the synths create space for guitar and vocals, and I really love how much is going on between the notes.”
Thematically, the record is about the connection between the human and the natural world. “The lyrics embody the balance we strike between the two, not only individually, but also with how we relate to one another in each world,” stated Sheehan. “The theme was not immediately apparent, but as the songs took form during the writing and recording process so did the meaning. I find that letting my subconscious mold songs as I write, is probably my favorite part about songwriting, and similarly in the studio. Being in the moment and letting things happen is what I love about it.”