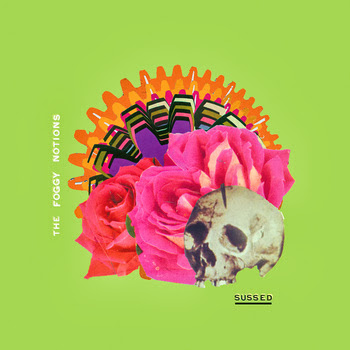 My life is going through some major changes, and consequently have been neglecting this Tumblr. I meant to post so many things, but don’t have time/energy to do so. Just right now I can write a nice review ofSussed by The Foggy Notions. I’ve been very vocal in the past about my love for this Saskatoon band. Plus, they are SUPER NICE people, and sent me a copy of this wonderful album even before it was available online, so THANK YOU GUYS! Actually, I was gone to LA during the time that they had their album release show in Saskatoon and I was going to post about it (had it written and everything) but the connection failed me. I was kind of hoping that they would come to Edmonton around this time and wanted to praise the album then, but I don’t think it’s happening any time soon. So now it’s the time!

Compared to their previous record, “Beginning to see”, “Sussed" has a fresher sound, with very distinct catchy and sweet dream pop songs. You can tell its shoegaze and early 90s Brit bands influences (e.g., Stone Roses), but still creating their unique sound. Anyhow, just listening to it, makes you feel in a better mood. I find myself sometimes humming their songs while doing dishes, or walking around, and believe me the same thing will happen to you after you listen to it!

The album opens with “One comes out alive”, which is an upbeat song, and has some awesome 90s-like keyboards, perfect to open the album and a personal favourite. Once the song is over, there’s a crescendo into “Shimmer”. In this song, Janice’s soothing vocals are more prominent, transporting you into a softer world. “Won’t take long” has more of psychedelic vibe, and the keyboards in this song are perfect! “What’s the difference” follows, this song was the teaser of the album and I already reviewed it in the past and said “This tune is like being in the middle of a sunflower field turning and sunbathing under a beautiful clear sky.”- I still think the same. “Love theme” is a simple but whimsical pop song sung entirely by beautiful Janice (I think I have a girl crush on her). Then, “Happiness” gets more upbeat, another catchy power pop song. “Nastro Elettrico”, an instrumental trippy song, leads the way to “Into the ocean”, another spot-on dream pop hit for me. Last, but definitively not least, one of my favourite songs of the album (I think I have too many favourites but whatever) and the perfect way to end this awesome project, “Sgt. Cribbs”.

I don’t know how much thought they put into the order of the songs, but the album flows seamlessly. I was already a fan of this band, and “Sussed" only reinforced my feelings. I just can’t wait to hear them playing live, because they sound amazing. Just take a listen to it, all the hard copies are sold out I believe, but you can get the download for $7. It’s nothing, and you’d be supporting one of the best Canadian bands. If don’t believe me, just listen to their songs. (Lovelessounds)