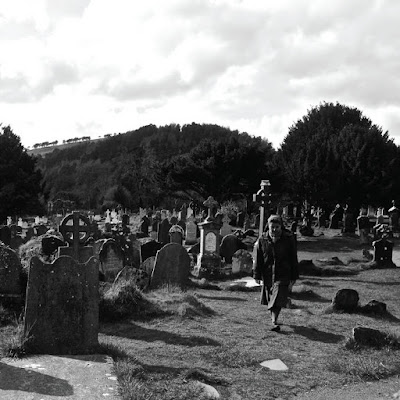 Though they are fast approaching the release of their debut EP, Pale Spectre should not be considered rookies. The band’s lead vocalist/guitarist, Aaron Hammerly, has long been a fan in the Minneapolis scene, with his dad taking him to shows at First Avenue before his 18th birthday, but only in the past year or so has he made the switch over from fan to performer. Privately, he’s been perfecting that shimmery guitar sound for years — and today, the group celebrate their first release with a show at the Triple Rock featuring other locals Waveless, Gloss, and the Chambermaids.

Pale Spectre includes some veterans of the scene. Gloss’s Jeff Cornell plays fret/fretless bass and Gunnar Kauth, formerly of Frankie Teardrop, is on drums; Patrick Donohoe of CLAPS and Principality is on synthesizers and Sean Neppl, also of Gloss, handles electric guitar. Hammerly met Cornell at Augsburg College, and the two began writing music and playing together with no particular end goal. However, the support and encouragement Hammerly found from Cornell and his future bandmates helped push the band from bedroom project to physical release.

I met with Hammerly on a breezy Wednesday afternoon at a nondescript but hip coffee shop. Hammerly, who is almost ready to graduate from college with a sociology major, and I discussed the nuances of the the local Twin Cities scene. While Hammerly may be slightly uncomfortable with the social currency he’s rapidly gaining here, he also admits he has found a home in the scene and among the supportive musicians he’s surrounded himself with.

“We wanted to make music and we don’t care about the social side,” he said, maintaining that the group’s mutual love of making music — and not a need for attention — is what’s driving the project.

Pale Spectre’s influences are readily apparent in their aesthetic as well as their material. When I first saw them perform live, someone asked me how long Hammerly had been in Echo & the Bunnymen before Pale Spectre. Hammerly agreed that Pale Spectre’s sound reflects the artists they admire: “we would want to open for the bands we like,” he said, bands like the Smiths (in an alternate universe where they’re still together) and the Cure.

The group does hopes to move forward from the post-punk sound of the ’80s with their next release. Hammerly lists a long list of androgynous visionaries such as David Sylvian, Annie Lennox, Boy George, and Morrissey as artists he respects not only for the musical contributions but also for their abilities to push the envelope and blur the line in regards to gender performance.

The first song on Principles & Faculties, “Bodies of Fate,” immediately hits with the familiar urgency of post-punk, but with self-confrontational lyrics and a punk edge, it’s quickly apparent that Pale Spectre isn’t just another quick ’80s rip-off. Their debut is the product of picking out the very best of a decade — dreamy synths, frantic basslines, and an overall sense of melancholy — and mixing and injecting the elements with the tastes of kids who have watched their parent’s vinyl collections grow both out and back into fashion over the course of the volatile aughts.(blog.thecurrent.org)