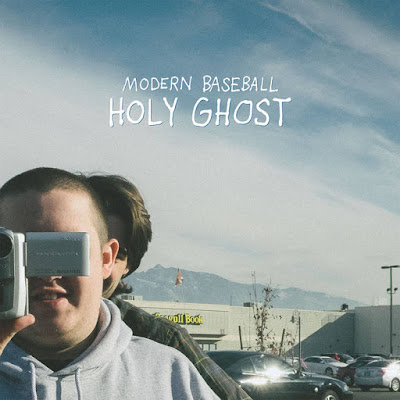 Falling in love and falling apart, faced with the loss of loved ones and struggling not to lose themselves, the 11 songs on this record are openly rooted in turmoil and confusion. Written in two halves (the first six tracks penned by Jake Ewald and the last five by Brendan Lukens), the album is a tempestuous storm of very real emotion, with the music as a means of expression for everything that couldn't quite be said any other way.

Frustration and desperation take hold on "Note To Self". "Words just whining, every fucking day. What do I really want to say?" Jake screams, reaching out for the right means to pour his thoughts and meanings into a connection. "I wanna make something good, I wanna make something better, something that cannot leave the ground unless we lift it up together," he sings. Well, it looks like all the wanting has paid off, because that's exactly what this album is.

A whirlwind of insecurities and wonder, Holy Ghost is the sound of four people coming to terms with who and where they are in the often overwhelming world that surrounds them. "I'm not the same as I was" Brendan shouts on "Breathing In Stereo", grasping to find his place amidst chaotically pounding rhythms and distorted refrains. The ideals are fractured and confused, the influences scattered, but working together the four-piece have made a record that can leave even the sternest of hearts soaring.

The shiver-inducing, stripped-back set up of the opening track is made all the more potent in its contrast to the rest of the record, but the hauntingly raw intensity of "Holy Ghost" is an energy that surges strongly throughout. With no holds barred, the band lay all their worries and hopes bare, and invite the listener to do the same. Adjusting to the distressing nature of the events that surround them behind a mask of upbeat melodies on "Wedding Singer", yearning for the romance of home on "Mass", and clamoring for self-acceptance on "What If...", it hasn't been an easy journey for the Philadelphia quartet, but their spirit remains resolute.

"I don't know how I got here" Brendan admits on the album's anthemic closing track "Just Another Face". "Even if you can’t see it now, we’re proud of what’s to come," is as poignant and hopeful as a band chant can be, but it's his additional "and you" that really hits home. For any moment ever spent feeling lost, Holy Ghost rages with the instinct to survive. Mixed up, muddled up, and as unsure of anything as the rest of the world, Modern Baseball have found strength giving a voice to their disillusionment. With the daring demonstrated here, they'll be singing their spirits sounds for a long time to come.