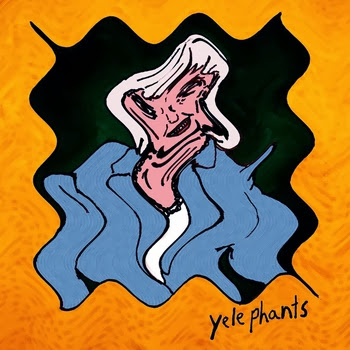 Following a free download single earlier this year, New Orleans band Yelephants have now put out their debut EP, 'Tart', also as a free download (well, name-your-price, and to be honest you probably wouldn't mind paying for their shambolic form of garage-rock). The quartet state that they haven't been together for that long but have already played a good few shows, and judging by the DIY enthusiasm that's thrown into these five songs you could probably bet that watching them would be a heck of a lot of fun. Even on record they sounds as though they're about to unravel in front of you, but that's all part of the charm.

They have good songs too, and the lack of studio sheen only serves to add an endearing quality to the EP. Take 'Jason'; a song with muffled guitar and bass that's just about glued together by a beat and has a good dose of melody from the vocals. It sounds a bit like The Strokes after they've been on a three day bender. 'Girls' has a classic punk riff and the vocals sound like Marc Bolan singing under a duvet; it's really quite good. They drop in what we assume to be a tribute to Burt Reynolds in the aptly-titled 'Burt Reynolds' but the vocals are indecipherable, so we're guessing really. Despite this it's another great track with a nice melody, as is the surfy 'Balloons', and once again any clarity is joyfully brushed aside in favour of making a superb racket instead. There is a slight break in style for final track 'HBMFS' but all in all 'Tart' is a triumph of tunes and passion over polish and professionalism. (The Sound of Confusion)