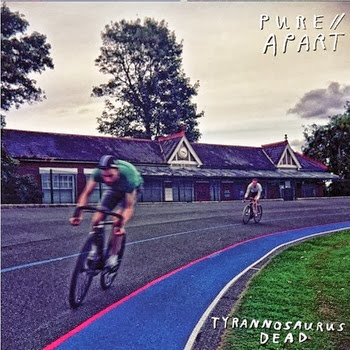 
With a handful of early releases hidden in obscure corners of the internet, it could be that 'Pure//Apart' will be many people's introduction to noisy London indie types Tyrannosaurus Dead, in terms of adding to their doing-quite-well-already-thanks fanbase this EP could be just about perfect. Producer Rory Atwell wasn't exactly known for making "tunes" when he was a member of Test Icicles, but recent production work with Veronica Falls, Yuck and Male Bonding amongst others would suggest he knows how to keep fans of DIY guitar scuzz-pop happy. To our immense joy this new EP takes us on a voyage through similar sounds but with a new identity fronting them. Tyrannosaurus Dead aren't a second-rate Veronica Falls, they're a first-rate Tyrannosaurus Dead and have drummed that fact home here by presenting us with high calibre songs.

It's 'Buried In The Ground' that kicks-off the EP, and if you don't like that then why on earth you're showing an interest in a website that deals with an awful lot of fuzzy guitar music is beyond us. It's near pop perfection and has a cracking guitar solo; there almost doesn't need to be a track break between that and 'Soft', a song with the same tempo and made of the same components but with a different melody. Maybe Pterodactyl Dead would be a more suitable name; they're in full flight here. Then they actually do do away with the track break between 'Soft' and 'Sadie', the two songs segue into each other seamlessly. The tunes are all the same make and model but the sheer energy on display is exceptional. By now, something resembling a half-time break is needed, and this is supplied in the grunge-pop of 'Matthew'. Or at least for the opening minute, then the song takes off again with astonishing consistency and power. It's hardly worth saying that 'Splinters' is high-octane fizz-bomb pop that packs a melodic punch. Usian Bolt would have trouble keeping pace with these guys. Then, just as your record player is about to pass out through exhaustion, they finish things with a no less guitar-heavy but a little less frenetic closer 'Pure & Apart'. The temptation is there to just head straight back to the start and take this ride again, but we're gonna need a little lie down first. (The Sound of Confusion)