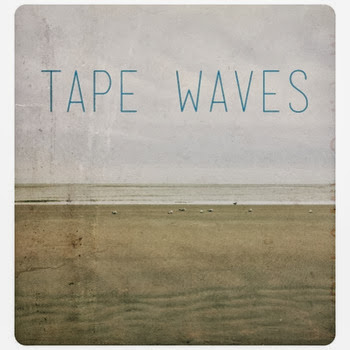 
They may hail from South Carolina, but it's Manchester (the UK one) record label Box Bedroom Rebels who will be releasing the duo's debut 7" single this summer. Until then, Tape Waves have a couple of tracks available for free via their Bandcamp page, and it all sounds promising to our ears. Along with other beach/sea/sand referencing guitar-pop bands that are doing the rounds, Tape Waves (which might not actually refer to waves in the sea, but still...) have a lo-fi sound and make warm fuzzy tunes with plenty of melody.

What's noticeable about the two tracks here is just how relaxed they sound. Not in a can't-be-arsed kind of way, more a totally comfortable kind of way. 'Ready Now' bobs along without a care in the world, with some ringing guitar and shuffly drums, the vocals being sat right in the middle of the mix and sounding soft and gentle. They possibly have a better song in 'Wherever I Go', another tune that's made from those same ingredients, but here the vocals are treated differently and handclaps join in, both adding a little extra zing. All in all, Tape Waves appear to be a very soporific band, but in the best way possible. (The Sound of Confusion)