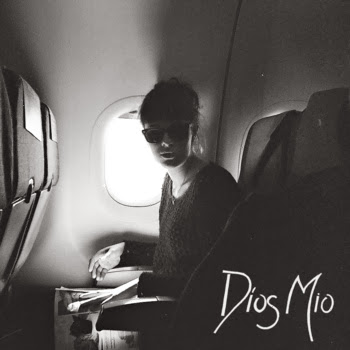 And so we are told "if it ain't broke, don't fix it". Such a statement may leave you a bit puzzled when talking about music, but Dios Mio's wonderfully fresh and bright new songs come with the description of "demo" attached to them. Seriously there is no need to change a thing about these songs. Leave them as they are. For certainly this is no scratchy, two-track affair. Instead we are given two hits of enchanting, bewitching, sugar-rush treats that simply will melt you away. We are ushered into 'Tough Crowd' with a spiralling cinema organ; a stately guitar takes us fully inside, then the velveteen vocals of Helena simply dissolve you away in a golden haze. 'Tough Crowd' has hints of mid '90s alt-gems such as Luscious Jackson and Lush, but this is no retro-tinged step-back. 'Tough Crowd' is crafted with such style and grace that it is at once contemporary and near timeless. A delicious bass lead, Pixies-style break delights and charms, pushing things up high, then the golden haze washes over once more, coaxed back in on some perfect harmonies.

Stepping back, this would be a double A-side release, for 'Lions' is every bit as marvellous as 'Tough Crowd'. Fittingly it has a deeper bite and its claws are sharp, but coated with the deepest red polish. It has glistening irresistible sense of urgency housed among its sparkling guitar and those enticing vocals. With a wicked spark and glint in her eye, we are told how, "no-one will ever make me feel as lucky as you", before we are treated to a peak of delectable venom in pure Karen O-style with a beautiful howl of "be lions". And then with a final flourish that Marr would be proud of, it is over. All we can hope for is that Dios Mio have many more of these delights to regal us with. (The sound of confusion)