CHARLY BLISS. A lot to say 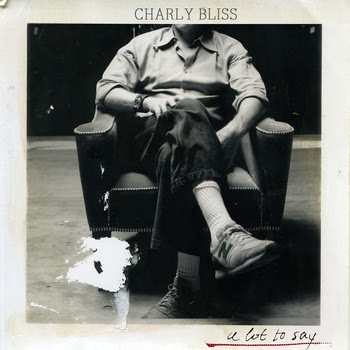 In children’s literature, the classic riddle asks the question as to ‘what came first, the chicken or the egg?’  When you’re talking about new, up-and-coming artists in the music industry, that question becomes ‘what came first, the band or the songs?’  In the case of the NYC-based quartet who call themselves Charly Bliss, the answer to that question is the latter.  The group came into being when the group’s future frontwoman Eva Hendricks approached friend and future band guitarist Spencer Fox with a few songs that she had written.  After recruiting Kevin Copeland to play bass and her brother Sam Hendricks on drums, the rest as they say is history and the band released their debut A Lot To Say EP on February 15th.
There is something both subtly nostalgic and keenly original about the way that Charly Bliss goes about their business.  There are some hints of mid-90s style indie rock inherent in what they do, but what most stands out right from the start is the deft hand that the band executes their craft.  The songwriting is fully fleshed out, each hook with enough muscle to stand toe-to-toe with seasoned indie rock veterans.   What sets them apart from other bands of their ilk is the range and maturity that marks their songwriting over the course of these four songs.
These guys are not merely one trick ponies; their blend of indie rock reveals a dynamic sense of composition that many groups spend years searching for.   Each of the EPs four tracks stands apart and shines for different reasons.  The title track “A Lot to Say” crashes through your speakers with an energetic frenzy that calls your attention from the start, while the massive sing-a-long chorus of “Friends” is so well designed that it will get stuck in your head for days.  ”Safe” (featuring Fox on vocals) is the most complex of the four, adding elements and building on the song structures before changing things up on the bridge and selling it’s merits once and for all.  At the end, the controlled, noisy crunch of “Wait” offers a fitting exclamation point for the record.  All the while, the arrangements feel almost perfectly set-up, the instrumentation never seems out of place, the production is clear without sounding too slick, and Hendricks’ sweet but strong-willed coo rings out with a seemingly signature presence.
The truth is that it’s not very often that you find a band who so early in their existence sounds like they’re firing on all cylinders, but that’s what Charly Bliss have presented us with here.  And if this is any indication of what we can expect from the band in the future, I suspect we and many more listeners will be hearing about them for a long time.  I suggest you hop on board now so that you can say you were there from the start. (Striker Bill)