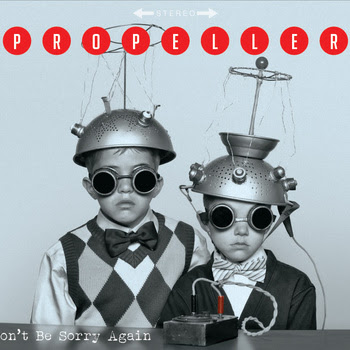 Within the first verse to chorus, Propeller set out their manifesto for 'Don't Be Sorry Again'. Rich harmonies, crunching, infinitely melodic guitars and lyrics longing for 'that' girl to come back, as on opener 'Gone Too Far.' Bringing to mind classic American alt-rock/pop of the Posies, Lemonheads with a dash of 'Copper Blue'-era Sugar. Second track 'Don't Want Anything From You' is ushered in with vibrant handclaps and choppy, fizzy guitars; a track with a sense of urgency recalling prime Redd Kross. It has a strong sense of its self and doesn't dissolve into becoming slightly cloying from its own sweetness. Its following track also manages to remain bright and urgent. 'Away She Goes' is all stuttering drums with flashes of chiming bells as 'that' girl is chased down again.

'Summer Songs' epitomises Propeller's search for that endless summer of youth, all sun-dappled sounds and songs "causing us to fall in love". But by now you can almost second guess the song, and are starting to either wish you were on that Californian beach or they bring a variation in their groove. 'Don't Be Sorry Again' happily picks up with the Lemonhead-like 'Used To Hang Around'. Here Propeller show mastership of their craft and the song codas out with those rich harmonies and an almost Replacements' sense of abandon. The next couple of tracks slide through with an overly sweet taste. The 'na-na-nas' of 'She's Out There' strive to lift the song, but are lost. Similarly 'Never Going Back To You' opens all fresh and breezy but settles into what is now an all too familiar open-topped ride. As you reach this point you end up craving a simple break in the bubblegum groove and a change of tack. Anything! A counterpoint female (such as Dando/Hatfield) or a change of pace. 'Never Going Back To You' comes close with its harmonised late refrain, but like tasting the raspberry milkshake you loved as a kid it starts off exciting, tingly, then becomes a bit too sweet and sickly which you struggle to finish.

'It Ain't You' updates those Replacements sounds heard earlier and adds a welcome rawness and Westerberg groove. Here, Propellers sound like they have given up on the girl had a few drinks and are just enjoying a new found freedom. They carry on with the lyrical longing, but now it's tempered with a shrug and another drink. 'Little Charmer' falls back into the sweet sticky stuff and is forgettable. 'Calling Out For You' is the most riotous track on the album with a 'Mrs Robinson' rollicking, head-shaking rumble. It manages to keep its tapping foot the right side of a 'Friends' soundtrack. And in the world of Californian love movies it should end there, as our guy gets the girl in a hot steamy, inevitable, embrace. But they eke out the template one last time on 'Might Never Be The Only One' and add that sticky sauce that no-one really likes. (Thesoundofconfusion)