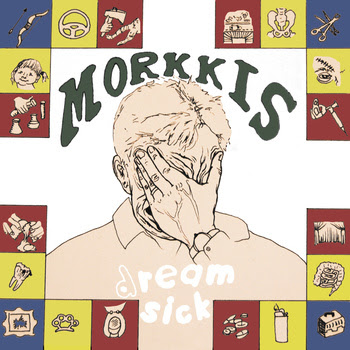 Dream Sick are as much garage rock or shoegaze as the Replacements were punk. In other words, they're a songwriter's rock 'n' roll band with superficial trappings of current styles. This is hardly detrimental to their new album, Morkkis. At its core, Morkkisfuses passionate performances and light experimentation with strong, anthemic songs that groups like the Replacements did.
This record is full of tales of frustration, omnidirectional anger and introspection that are the stock in trade of young 20-something bands, and Dream Sick's mastery of the form makes these familiar themes just as vital as those of any of their predecessors.
Lead singer Jess Matsen hollers all over the place, hoping he's not a fool, breaking windows so his girlfriend might understand him, while the rest of the boys pound along in post-adolescent fury. Tracks like "Photoframe" and "Unwind" are particular standouts on a record that really has no weak spots.
The two-guitar, bass and drums format always works well for these types of story songs. But after a few listens, the psychedelic window dressing becomes integral to the music, leaving the guitar feedback to scream the post-grad blues when Matsen stops for the moment. (Joshua Levine)