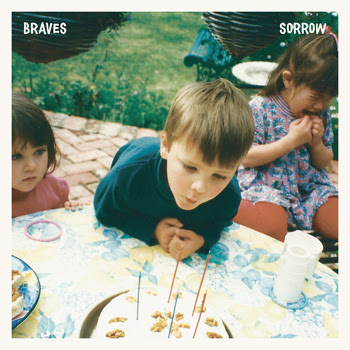 Having just returned from spending Christmas/New Years in Western Australia (the majority of which was on the beaches in Scarborough, just north of Perth), I found it a bit humorous to find a facebook message greeting me upon my arrival from the band Braves who happen to call that part of the world home. For those whose only knowledge of Perth music begins and ends with Tame Impala, it might come as a shock to learn that there are a lot of great uncovered bands out in the middle of nowhere. Fortunately, I got to witness first hand the local talent, and, after listening to their linked EP, Braves definitely makes the short list of Perth’s best.

Sorrow is a five track, twelve minute ride that is full of lo-fi, rough-around-the-edges goodness. My favorite songs have to be the bookends: with the instrumentation and the verse vocals on the opener “Sadko In the Underwater Kingdom” reminding me a lot of early Wavves (you know, when he was good), whereas the closer “Hallows” sounds like a Captured Tracks-ready single. This is the type of EP that makes you salivate for more — here’s to hoping an LP also greets us in 2013!