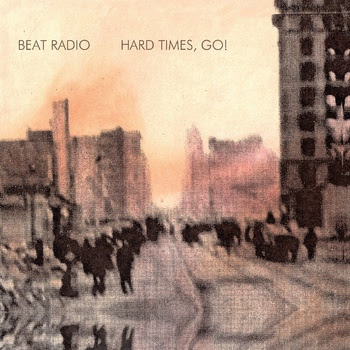 
Before I explain our new record I should maybe introduce myself. I’m Brian Sendrowitz and I live with my wife Liz and our 3 young boys in Bellmore, NY. Bellmore is a small town near the south shore of Long Island. I’ve been putting out music as Beat Radio since 2005. I guess my music career/family trajectory was sort of backwards. I never wanted to put my life on hold for my art. The lineup for the band has changed a lot over the years, but the latest record has primarily been a collaboration between my drummer Brian Ver Straten and I.

I’ve somehow gotten into the habit of writing songs as lifelines. Last fall when I started working on the material for this album I was in sort of a dark place. The existing band lineup seemed to be dissolving. I don’t remember an exact moment when it happened. All I can remember is feeling a strong urge to start writing and figure out what the next step should be on my own. Liz and I were going through difficult times financially, struggling to make things work from one month to the next. Like so many people around the country we felt trapped and disillusioned. It started to feel like the walls were closing in around us.

I needed a place to put my anxieties about things, and perhaps more than anything I needed an escape. I headed down to my basement studio. In the past I’ve drawn inspiration mostly from artists like Sparklehorse, Neutral Milk Hotel, and Van Morrison. Last fall I fell headlong into a deep obsession with the Swedish pop star Robyn. I listened to her Body Talk album on repeat, hunted down all the remixes, watched endless Youtube clips of live performances. Liz and I would spend long road family road trips analyzing the narrative complexity of her songs. We also started writing songs together, trying to capture a little bit of the brilliance we heard coming through the speakers of our minivan.

The sound of the new Beat Radio album was beginning to take shape in my mind, and my ambition was to work with the rhythms and melodic structures of electronic dance/pop music, but flesh things out with more organic sounds. Lyrically I felt like the stories I had to tell needed to be more focused around the realities of what we were going through. My records in the past have been thematically centered around a romantic escapism and a nostalgia for things past. I wanted the new songs to address real adult problems, in the way Bruce Springsteen had started to do with his records Darkness on the Edge of Town and Nebraska. I didn’t feel like I should hold anything back, and I wanted to be as direct and honest as possible. I decided to follow Robyn’s lead and release a series of EPs the way she had done with Body Talk. My original ambition was to have the entire album thematically correlate with Robyn’s album, sort of in the way that Liz Phair’s Exile in Guyville was a companion to the Stones’ Exile on Main Street. That plan ended up being a bit more grandiose than what actually happened.

In the end, we ended up with another Beat Radio record. We challenged ourselves to make it. The songs feel special, and we’re really proud of them. We’re trying to spread the word about our music as far and wide as possible. If you could share with your friends that would be awesome.

Thanks for listening,
Brian