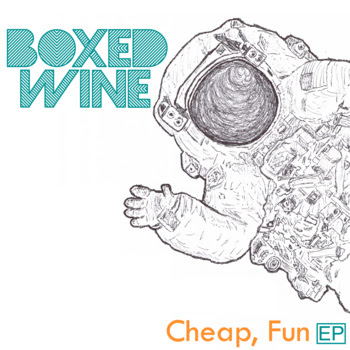 
It's somehow fitting that a band named Boxed Wine should call a record 'Cheap, Fun', as that's pretty much the purpose for buying boxed wine in the first place (it can't be for the taste, surely?). We're pleased to note that there has been no great stylistic departure since we last featured them in the summer, so look forward to more full of beans powerpop tunes with a slightly punky edge and a slightly goofy one too. In fact 'Cheap,'Fun' is actually a nice analogy for these songs. They're not elaborate, intricate and tweaked in post-production until everything is precision engineered, no, they're fun and, well I guess kind of cheap. It's some blokes hammering out some catchy pop tunes on guitars, not the London Philharmonic Orchestra.

This is how we want them to be and it's almost certainly how they want to be, because they know just as well as us that there's always room for some lively guitar tunes that are to be listened to and not studied. The equivalent of writing your dissertation on this EP would be this review. Short and to the point, but it does its job. 'Bones' has a riff that almost toys with math-rock but from there it's headlong into pop-punk enthusiasm. There's a little bit of We Are Scientists creeping into the bouncy indie of 'Boomerang', but they save the best until last. They dare to venture a little further towards universal pop on 'Dayglow (Why Can't We Stay)' and you get the impression that this is Boxed Wine letting us know they could turn their hands to other styles if they wanted. It actually sounds a bit like Friendly Fires and Little Comets remixing each other. Cheap, fun and we wouldn't want them any other way. (thesoundofconfusionblog)